The first words of the New Testament, before Mary’s pregnancy and Joseph’s angel dream. Before the traveling of Magi and the escape to Egypt there is a geneaology. A long list of people marking the generations from Abraham to Joseph, the husband of Mary. A listing of the way…the way Jesus came into the world.

Forty-two generations full of men, fathers, and kings. Isaac, Jacob and King Solomon look familiar among the names I can’t spell much less pronounce. Among the men four women are mentioned. Only four though we know others existed. You can’t have generations without mothers along with fathers.
Four women made the list. If you don’t know their history you might think they were a “cut above the rest”. Women who led wonderful lives to be numbered on the list. They didn’t and they weren’t. These were women with a long list of struggles…widows, adulterers, prostitutes.
Tamar tricked her father-in-law by pretending to be a prostitute, because she was a widow with no children and the family wouldn’t do right by her.
Rahab lived in the city wall selling herself to provide.
Ruth was the foreign, childless, widow who followed her mother-in-law home.
And Bathsheba, Urriah’s wife, was an adulterer.
They didn’t know then what we know now. No way to know the story of their lives would be written for anyone to read. No way to know God was weaving history through their cheating, messed-up, crazy lives.
I open the Gospel to read good news and the very first words, the lineage of generations bringing us to Jesus, is a message of grace. Every single name on the list represents some issue, some sin, some way to mess up. If there is one thing I have in common with them, it’s the mess up. 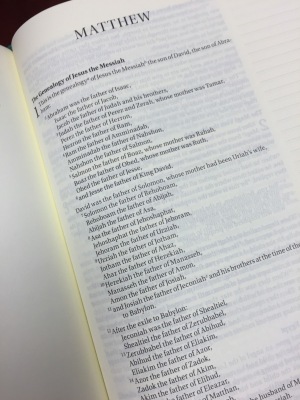 Life is messy and so am I. There’s no amount of cleaning I can do to redeem myself. No amount of living right that just might get me into the pages of history. I’m struck by the good news this morning. The reality that God uses messed up, crazy lives to bring good news.
I might not see the good news some days.

You may not either.

One day we’ll see our names in the book…generation after generation all messy and woven into the story of Christ. We’ll see how all of Advent is the shouting of Good News that cleans up the whole wide world.

← I’ve been singing it for weeks now…
What in the world? →